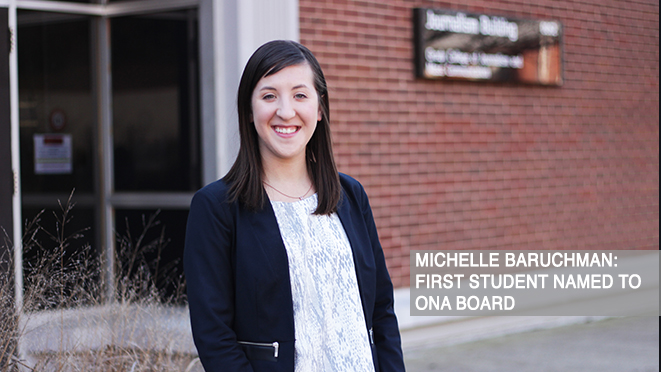 Grady digital broadcast journalism student Michelle Baruchman was appointed by the Online News Association as their first Student Representative to the Board of Directors. She will be the voice of their student members, advising the board and staff how to better serve journalism students.

According to a release posted by ONA, the committee was impressed by Baruchman’s thoughtful plan outlining what she’d like to accomplish in her two years in the role, which included helping to build ONA’s local networks, increasing access to resources for students and working to promote diversity of students and educators.

“I’m definitely going to be absorbing everything from those around me at first,” said Baruchman. “I’m on a board with extremely talented, smart and innovative media professionals, and I am as eager to learn from them as they are to gain insight from me. I hope to figure out ways to incentivize more young people to choose to become journalists, and more specifically, consider digital journalism. I want to find ways to make opportunities more affordable and accessible, and equip students with the resources they need to succeed.”

Baruchman, a Woodstock, Ga., native, is in her junior year and is also majoring in international affairs and pursuing a New Media Institute certificate. Baruchman has worked for the Red & Black as a crime beat reporter, news editor and an audience development consultant.  She also interned with The Atlanta Journal-Constitution this past summer, in their digital audience department. She will continue refining her video production and editing skills for Grady Newsource next semester.

“Michelle's experience in the classroom, in student media and through internships gives her the various perspectives she needs to serve on the ONA board as its first student representative,” said Herndon. “Her initiative to apply for this position reflects the Grady spirit of service to the industries we train for, and we're excited she was chosen for this opportunity.”

Michelle was chosen from a range of exceptional candidates by an Ad-Hoc Committee made up of Board members who are also select members of ONA’s Diversity, Education and Membership committees: Benet Wilson, Chair; Robert Hernandez, Jody Brannon and Greg Linch.