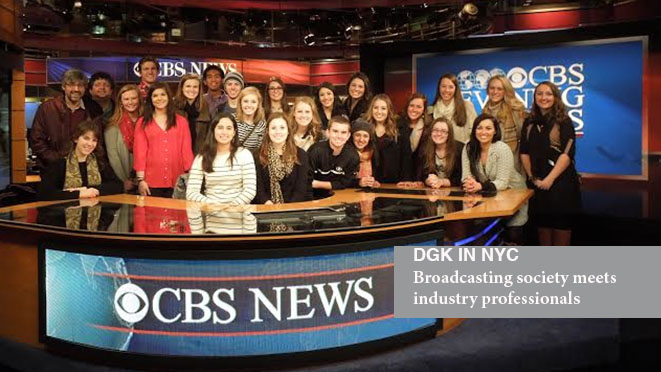 The second annual trip afforded students the opportunity to meet with a wide range of professionals, many of whom are alumni of the Grady College.

Over the course of five days, students visited the Fox Business Network where they spoke with Amanda Pressman-Smoot (ABJ ‘00) and Matt Schiavone (ABJ ‘05). They toured the set of “Good Morning America” with booker/segment producer Eric Jones (ABJ ‘12) and met with hosts Ginger Zee and Amy Robach (ABJ ‘95).

DGK members also visited ABC’s affiliate studios in the city, CBS News and News12, a local station in Long Island. Additionally, students met with professionals in commercial film production at Go Film, Hayden 5, and Rascal Films, spoke with a sports reporter for the Wall Street Journal, and were introduced to Mo Rocca, star of the Cooking Channel’s “My Grandmother’s Ravioli”.

The students also had time to explore the city and meet individually with professionals that work in areas of the industry specific to their interests, according to DGK director of professional travel and conferences Shayna Brandi, a junior mass media arts major from Marietta and organizer of the trip.

“We established many new networking connections within the industry, received advice from experts that had once been in our shoes, and gained access to an inside look at the professions we soon hope to make into careers,” Brandi said.