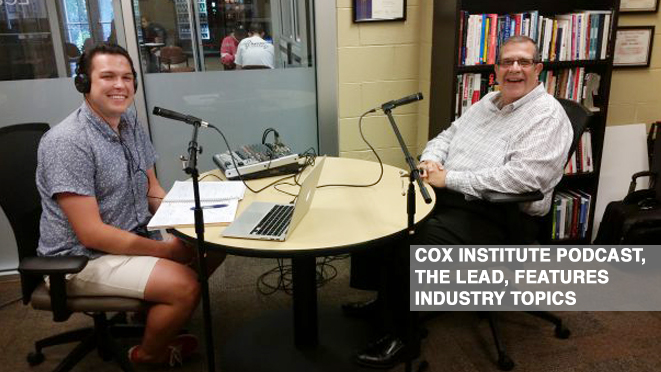 Students at the Grady College of Journalism and Mass Communication now have a new way to learn from people who have made it in the media industry: The Lead.

Daniel Funke, a fall 2016 Innovation Fellow with the James M. Cox Jr. Institute for Journalism Innovation, Management and Leadership, produced the first six podcasts of The Lead to tap into the insights of seasoned journalists, editors, professors and executives.

“Oftentimes, notable media figures come to campus to give talks at Grady and elsewhere, and a lot of students aren’t able to attend because of class. Additionally, not every student can go on trips to journalism conferences around the country,” Funke, a senior journalism major, said. “By interviewing these people on The Lead, I hope to bring their perspectives and experience to the fingertips of every student.”

“Essentially, I try to pick people that I think all students would be interested in and that have unique and interesting viewpoints on journalism,” Funke said. “In the first season, we ran the gamut from journalism education and modern photojournalism to maintaining side hustles and learning from the 2016 election. Each guest has one thing in common — their successful careers in journalism and their specialization in an important area of the field.”

In listening to the podcast, Funke wants students to understand the ever-evolving nature of journalism.

“In order to preserve the industry, we should be asking the most talented folks about how their experiences have affected their work,” he said. “At the very least, I hope students and others in the journalism industry listen to The Lead and learn something new about their profession.”

Season 2 of the Lead will be produced during spring with Funke adding new episodes throughout the semester.