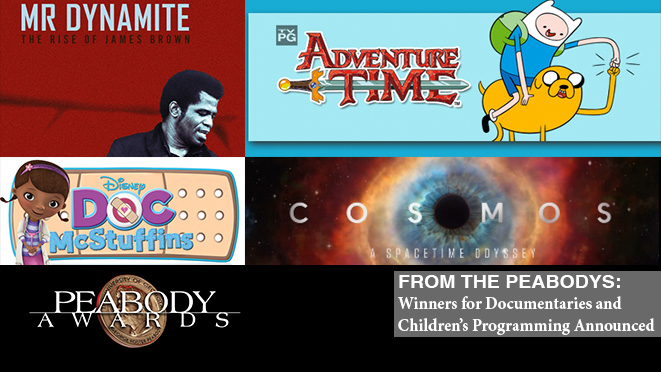 An out-of-sight biography of James Brown and an out-of-this-world tour of the heavens were among the diverse documentary, education and public service winners of the 74th annual Peabody Awards announced Thursday by the Peabody program at the University of Georgia. “Adventure Time,” a surreal cartoon series that enthralls teens and adults as well as kids, and the gentle, educational “Doc McStuffins,” aimed at a much younger audience, were also honored.

The Peabody Board of Judges cited HBO’s “Mr. Dynamite: The Rise of James Brown” for its revealing portrait of the famous but enigmatic soul-music pioneer and “COSMOS: A SpaceTime Odyssey,” shown by the National Geographic Channel and FOX, for its dazzling virtual tour of the final frontier and its energetic evangelizing for science.

The Judges also cited “United States of Secrets,” a deeply researched “FRONTLINE” documentary about the alarming growth of government surveillance at home and abroad since 9/11; “Human Harvest: China’s Illegal Organ Trade,” a chilling investigation by Flying Cloud Productions that implicates the Chinese government in the murder of political prisoners to meet the demand for transplantable organs; “Brakeless,” a cautionary film from “Independent Lens” about a train crash and our obsession with going ever faster; and “Freedom Summer,” an “American Experience” remembrance of a pivotal Civil Rights campaign: the life-risking voter-registration expedition to Mississippi in 1964.

Other documentary winners included “Children on the Frontline,” a portrait from Britain’s ITN of Syrian children coping with wartime chaos and danger; “Virunga,” a Netflix documentary about Congolese game-keepers trying to save gorillas from war, poachers and corporate exploitation; and “The Newburgh Sting,” an HBO documentary about four New York men enticed into a terrorist plot by an FBI informant.

The documentary list also includes “American Revolutionary: The Evolution of Grace Lee Boggs,” a “POV” film of a remarkable Chinese-American human-rights activist; and “Soft Vengeance: Albie Sachs and the New South Africa,” a thoughtful portrait of an inspirational anti-apartheid activist.

Public service honorees included the BBC World Service’s invaluable, multi-platform conveyance of news and information about the Ebola, directed as much toward preventing the deadly virus’ spread in Africa as informing western listeners; and “Entre el Abandono y el Rechazo (Between Abandonment and Rejection),” Univision’s thorough and timely reporting about the thousands of unaccompanied Latin American children seeking asylum in the U.S.

Disney Junior’s preschooler series, “Doc McStuffins,” was cited for its disarming, inspiring storytelling about a female, African-American doctor’s daughter who “treats” other kids’ broken toys, while Cartoon Network’s “Adventure Time” was praised for its uniquely imagined, truly odd fantasy world and for stories about exploration and adventure to help kids work through their anxieties about growing up and maturing.

The entertainment winners for the calendar year 2014 are “The Americans,” “Black Mirror,” “Fargo,” “The Honorable Woman,” “Inside Amy Schumer,” “Jane the Virgin,” “The Knick,” “Last Week Tonight with John Oliver” and “Rectify.”

News, radio and podcast winners for 2014 are KVUE-TV’s “The Cost of Troubled Minds,” VICE News’ “The Islamic State” and “Last Chance High,” Scripps Washington Bureau’s “Under the Radar,” CNN’s coverage of the kidnapping of Nigerian school girls and its expose of deep systemic malfunction at Veterans Administration hospitals, and NBC/MSNBC’s continuing coverage of ISIS.

All the winners of the 74th annual Peabodys will be presented with their awards on Sunday, May 31, at the first-ever nighttime, red-carpet Peabody ceremony. Fred Armisen, a Peabody winner for his work on “Saturday Night Live” and his series “Portlandia,” is set to host the gala at Cipriani Wall Street in New York. Pivot, Participant Media’s TV network, will premiere “The 74th Annual Peabody Awards on Pivot,” a 90-minute special on Sunday, June 21 at 9pm ET/8pm CT.

With archival images, animation and fresh interviews, “Freedom Summer” recalls the voter-registration “freedom rides” of 1964, a campaign planned and trained for like a Civil Rights D-Day. The documentary is not only inspiring and instructive,it holds surprises even for those who believe they know this epochal American story.

This “Dispatches” documentary addresses one of the most tragic facets of the civil war in Syria, the impact on the country’s children. Yet by focusing on five kids who go on learning and playing amid the chaos and danger, it becomes a powerful testament to resilience and adaptability.

With powerful testimonials about the intricacies of the trade and the human cost, including interviews with Chinese doctors who confide they’ve been coerced into removing organs from live political prisoners, this is a harrowing exposé of a fiendish system of forced organ donor transplants.

A cautionary tale that vividly evokes a deadly, 2005 commuter-train crash in Japan as a metaphor to explore modern society’s relentless pursuit of speed and efficiency, it’s beautifully made and scored like a real-life thriller.

Alex Gibney’s biography of the hardest working man in show business gets up and gets on the scene, telling a fascinating story about race and culture and politics with amazing archival clips and interviews with musicians who worked with him.

A powerful, fascinating documentary, it uses archival surveillance video and eloquent, emotional interviews to deconstruct and discredit the case against four Newburgh, New York, men lured into a would-be terrorist plot by an FBI informant in 2009.

Engaging on multiple levels, the documentary surveys the life of a Chinese American philosopher, writer and activist who devoted 75 years to the labor, civil rights, and black power movements. Now 98, with a grandmotherly smile, she’s a charismatic presence on camera and still a challenging thinker.

Compelling and inspiring, this well-constructed documentary chronicles the life and times of a hero of the anti-apartheid movement who championed nonviolence even after he survived a car-bomb maiming.

With extensive, candid interviews from both critics and defenders, FRONTLINE provided a great public service, revealing in clear, comprehensible detail how the U.S. government in its post-9/11 zeal came to monitor and collect the communications of millions of people around the world – and here at home –  and the lengths to which officials have gone to hide the massive surveillance from the public.

An unusual but successful melding of investigative journalism and nature filmmaking, “Virunga” documents the work of courageous park rangers in the Congo to protect Africa’s mountain gorillas from war, poaching and industrial expansion.

An update of Carl Sagan’s famous series for the age of CGI, astrophysicist Neil deGrasse Tyson’s “COSMOS” is not only an educational, eye-popping, near-psychedelic tour of our universe and beyond, it’s a passionate brief on behalf of science itself.

An incredibly important and consequential response to a global crisis, this multi-pronged BBC World Service effort shrewdly employed a variety of platforms – Twitter, website and apps as well as radio – to keep Africans abreast of the epidemic’s advance and provide people the world over with reliable news.

Reflecting the high level of public interest in abandoned children at the southern U.S. borders, Univision’s coverage provided multi-perspective context that’s often missing in mainstream media’s English-language reports. It skillfully combined an overview of the phenomenon while following one family whose child disappeared trying to the cross the border.

An animated amalgam of sci-fi, fantasy, horror and fairy tale, it chronicles the escapades of an odd-looking human boy named Finn and his best friend, a shape-shifting dog named Jake, in the surreal Land of Ooo. Purely and wonderfully imaginative in the manner of classic theatrical cartoons past, it entertains even as it subtly teaches lessons about growing up, accepting responsibility, and becoming who you’re meant to be.

Charming, sweet and gently humorous, this animated series, featuring an African-American physician’s daughter who attends to damaged stuffed animals and other broken toys, alieves children’s fears about doctor visits even as it promotes medicine as a profession.