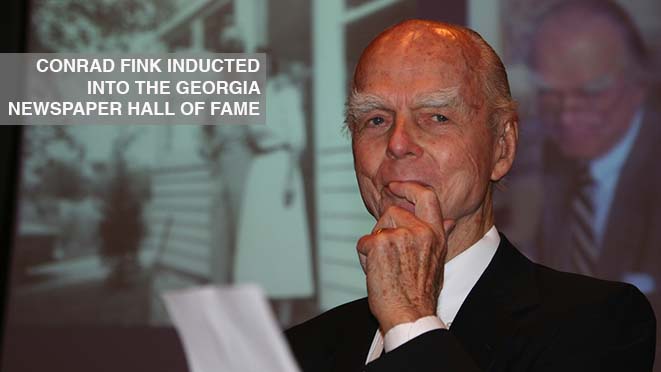 Beloved Grady College Professor Conrad Fink was inducted posthumously into the Georgia Newspaper Hall of Fame on June 4, 2015 in recognition of his lifetime of outstanding contributions to journalism in the state.   The ceremony was held during the Georgia Press Association’s annual convention at the Jekyll Island Westin Hotel.

“I was a post-baccalaureate student, working part-time at the Athens Banner-Herald and trying to figure out if journalism was my calling, when I walked into a Grady classroom and smack into Professor Fink,” Davis recalled. “I changed a little that day, and every day at Grady during my graduate studies, thanks to him. We Finksters share a bond with the great man, and are delighted to see him inducted.”

A former Vietnam War correspondent and Associated Press vice president, Fink taught at Grady College for three decades until his death in January 2012.  He was the William S. Morris Chair of Newspaper Strategy and Management and director of the James M. Cox Jr. Institute for Newspaper Management Studies.  Among his many teaching honors, Fink was a Josiah Meigs Distinguished Teaching Professor and was named a Freedom Forum's National Journalism Teacher of the Year.

In a 2004 press release announcing his selection as a recipient of the Regents’ Award for Excellence in Teaching, Fink said he learned as much from his students as he has taught, and grew personally in new, unexpected ways while helping generations of students learn and grow.

“They learn, I learn – and together we move at least a bit toward the enlightenment that surely must be the goal of creative minds,” Fink said.

We moved together toward enlightenment – dozens lucky enough to call ourselves “Finksters,” to have rubbed shoulders with greatness, and to have learned under a master teacher. And isn’t that what higher education should be about, at the end of the day?

A plaque honoring Fink will be displayed at the Grady College, the home of the Georgia Newspaper Hall of Fame.

Conrad Fink inducted into the Georgia Newspaper Hall of Fame