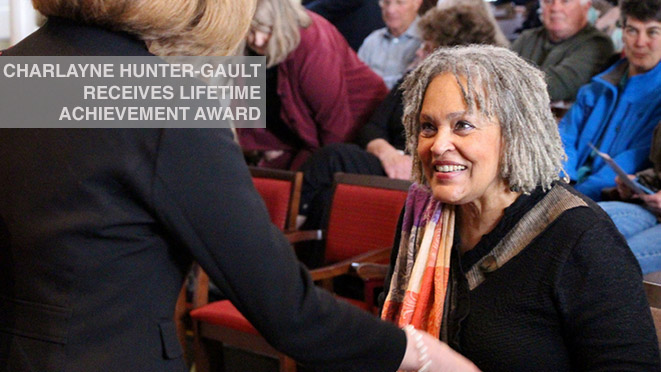 Charlayne Hunter-Gault, a 1963 graduate of the Grady College, was honored by the Washington Press Club Foundation with the 2015 Lifetime Achievement Award on Feb. 4 at the 71st Annual Congressional Dinner in Washington, D.C.

Excited and honored to be getting Lifetime Achievement award from Washington. Press Club Foundation 2nite.

After graduating from UGA, Hunter-Gault joined the staff of The New Yorker. She later worked as a reporter and evening news anchor for a Washington, D.C. television station and then for a decade as a reporter for The New York Times. She joined PBS's “MacNeil/Lehrer Report” in 1978 and for two decades was a national correspondent for what is now the PBS “NewsHour.”

In 1997, she became the chief correspondent in Africa for National Public Radio. She joined CNN in 1999 as its bureau chief and correspondent in Johannesburg, South Africa and returned to NPR as a special correspondent in 2005. In 2007, she published the book “New News Out of Africa: Uncovering Africa's Renaissance” and in 2012 published “To the Mountaintop: My Journey Through the Civil Rights Movement.”

In addition to winning two Emmy Awards and three Peabody Awards, Hunter-Gault has received the Journalist of the Year Award from the National Association of Black Journalists and in 2005 was inducted into the NABJ Hall of Fame. She has been honored with an American Women in Radio and Television award, and her human rights reporting has been recognized by Amnesty International. In December 2014, the National Civil Rights Museum recognized Hunter-Gault with the International Freedom Award.

Hunter-Gault is an active supporter of the Grady College and a current member of the Peabody Board of Jurors.