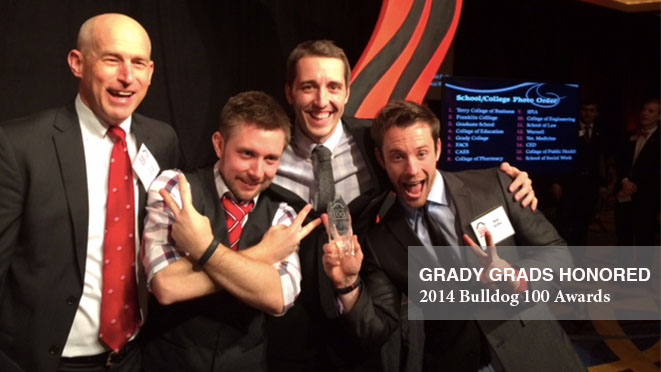 A company founded by graduates of Grady College’s New Media Institute was recognized as the second fastest growing company owned or operated by UGA alumni during the fifth annual Bulldog 100 Celebration Jan. 25 at the Atlanta Marriott Marquis.

“We were blown away and humbled to be so high in the rankings,” Planovsky said. “We are still on cloud nine.”

While at the university, the three were very involved in the New Media Institute (NMI) as Mobile Media Scholars.

“We’re really excited to represent Grady and the NMI, because our company’s genesis is so closely tied to what we were doing there,” Planovsky remarked.

“In 2005, Vert Mobile's founders were NMI students,” Shamp reflected. “Now, they run the number two company in the Bulldog 100! And they weren't the only NMI alum run business in the 100. It’s proof that NMI and other Grady digital media programs are playing a real role in growing Georgia's economy.”

Another NMI alumni led company, Full Media, finished at No. 34.

Other Grady alumni recognized during the awards ceremony were:

To be considered for the list, each company must have been in business for at least five years, experienced revenues in excess of $100,000 for the calendar year 2010, and be owned or operated by a former UGA student who owns at least 50 percent of the company or be the CEO, president or managing partner.

The complete list of the 2014 Bulldog 100, photos from the event and 2015 sponsorship information are available at http://www.alumni.uga.edu/b100.