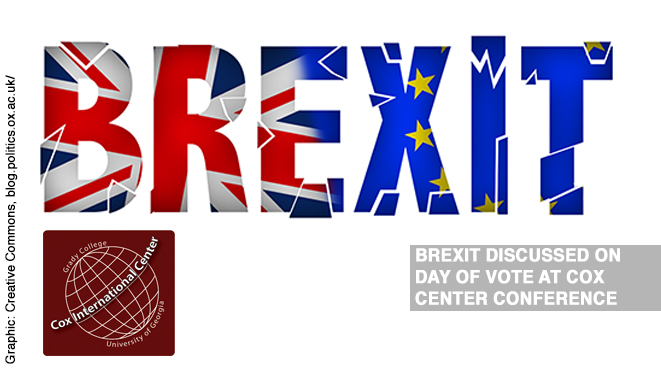 The vote by United Kingdom citizens on June 23 to exit the European Union underscored the importance of a two-day conference held that day and the next at the National University of Political Studies and Public Administration in Bucharest on the U.S. and European alliance.

Speakers on the day of the vote speculated on the vote and the alliance, and on the second day they reflected on the meaning of the decision by 52 percent of the U.K. voters in favor of ending the county’s membership in the European Union.

The conference was organized by the College of Communication and Public Relations at the National University and by the James M. Cox Jr. Center for International Mass Communication Training and Research at the University of Georgia.

Citizens in the U.S. perceive political and economic problems in Europe and are sensitive to the issued caused by immigration, Owen Ullmann, managing editor for world news at USAToday told the group on the day before the vote.

Bogdan Chirieac, editor-in-chief of DCnews an online quality news site in Bucharest, said Americans have to have patience with Europe.

“Twenty-seven years after the fall of communism is not enough,” he said. “There are huge economic differences between east and west in Europe” that continue to have implication for the effort to create a united Europe.

Alina Bargaoanu, vice rector for research at the National University, said there are many challenges facing Europe, from immigration to management of the Euro currency and dealing with the crisis involving the debt burden of Greece.

“What unites us is Euroskepticism,” she said, saying that public opinion polls show many citizens are skeptic about the European effort and distrustful of the European Union.

Tudor Vlad said his analysis of the content of three U.S. cable networks, CNN, Fox and MSNBC, showed little attention in the U.S. media was devoted to European issues. Vlad is associate director of the Cox International Center, which is a unit of the Grady College of Journalism and Mass Communication at the University of Georgia.

Antonia Colibasanu, regional advisor for Europe for Stratfor, an international consulting firm, told the group after the vote was known on June 24 that the economic problems in the European Union have led to social problems, including the rise of populism.

Alexandru Coita, a diplomat by training and managing partner of Ganes, blamed the media in part for the problem. The media focus on charismatic figures and “this encourages populism,” he said.

Clara Volintiru, a faculty member at the University of Bucharest, said one of the problems is that the European Union is not focused sufficiently on demographics. “Southern Europe is forgetting all about its young,” she said.

Ullmann on day two of the conference said he expected “tremendous financial market turmoil” as a result of the vote in the U.K. to leave the Europe. He said that would produce an “economic drag” in Europe as well as in the U.S.

Ullmann said he also felt it was likely the vote would lead to the breakup of the U.K., as Scotland and Northern Island seek to dissolve that governmental unit so they can remain in the European Union.

Lee B. Becker, director of the Cox International Center, focused in his closing comments on the dramatic changes in the media landscape in the U.S., saying it has occurred at a time populism reflected in the success of Donald Trump in the Republican primaries.

“We don’t know yet if there is a causal relationship,” Becker said, but Trump has been expert at use of the social media and the traditional media in his rise to power, he noted.

About 40 people attended the two-day conference, the seventh held by the National University and the Cox International Center over as many years.

Remus Pricopie, rector of the National University, and Nicoleta Corbu, dean of the College of Communication and Public Relations, praised that collaboration in opening the conference.

Becker said the collaboration has been extremely valuable to the University of Georgia and the work of the Cox Center, as well.