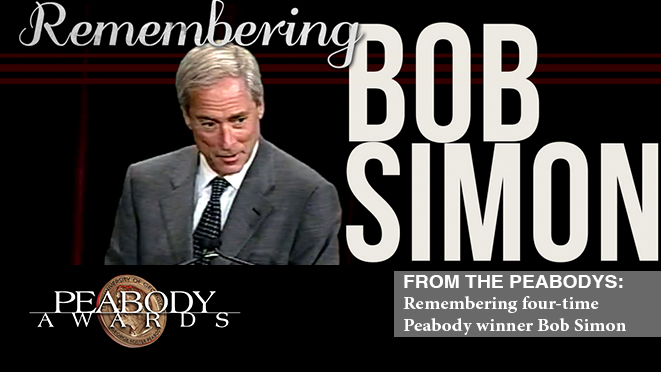 Grady College is the proud home of the Peabody Awards, scheduled this year on Sunday, May 31, 2015, in New York City. The remembrance, below, was written for www.PeabodyAwards.com and is reprinted with permission.

The news hit hard — and then the irony. Bob Simon, the decorated journalist and “60 Minutes” mainstay, was dead, killed in an automobile crash Wednesday in New York City. Simon, who had survived as many war zones and hot spots in his 47-year career as any reporter alive, met his end in route to a seminar when the driver of his livery cab lost control. It's not only tragic, it seems anticlimactic, unfair, too ordinary for a man who lived so boldly.

Tributes continue to pour in. Simon was revered not only by his CBS News colleagues, but by his competitors and even people who had a different political view of the world.

“Bob Simon was a giant of broadcast journalism, and a dear friend to everyone in the CBS News family,” CBS News president David Rhodes said in a statement. “We are all shocked by this tragic, sudden loss. Our thoughts and prayers are with Bob's extended family and especially with our colleague Tanya Simon.”

Simon had four Peabodys in his trove of awards, including a personal honor bestowed in 1999. The citation, which sounds even more apt and resonant in today's downsized, trivialized journalistic environment, reads:

“In an age when neophytes with cell phones, websites and mini-cams claim to be 'journalists' and when the debate on critical global issues often takes on a shrill tone amplified by thousands of extremist voices, Bob Simon's reports for “60 Minutes II” and “60 Minutes” ring with reason, truth and informed insight. A previous recipient of the Peabody Award as part of CBS News' coverage of the assassination of Israeli prime minister Yitzhak Rabin in 1995, Mr. Simon spanned a diverse set of global issues and events in his 1999 reports. These reports ranged from the ongoing tragedy in Yugoslavia (Shame of Srebenica) to Iran — where some leaders expressed regret about their role in seizing American hostages two decades ago (Sorry About That) — and to England and Australia, where shameful policies designed to preserve the 'white race,' separated mothers from their children for fifty years or more (Lost Children). Bob Simon's work has appeared on nearly every CBS News broadcast. Named CBS News' chief Middle Eastern correspondent in 1987, Mr. Simon's resume reads like a world history book. He has chronicled dozens of the most important events of the past 30 years, including the devastating Kobe, Japan, earthquake, the birth of the Solidarity movement in Poland and the horrific famine in Biafra. Simon was with Israeli troops during the Yom Kippur war, with PLO fighters during the Israeli invasion of Lebanon and in Gaza the day the 'intifada' began. The personification of the fearless international reporter, Mr. Simon was captured by Iraqi forces during the opening days of the Gulf War in 1991 and was imprisoned for 40 days. In recognition of a distinguished career in international reporting and in anticipation of many more years of courageous and important global journalism, a Peabody Award is presented to Bob Simon, CBS News.”

Simon most recently won a Peabody in 2012 for Joy in the Congo, an inspirational “60 Minutes” piece about a Congolese man who had taught himself to read music, learned to play several instruments and started a homegrown symphony orchestra in a nation mainly known in the west for its poverty and warfare. It was wonderful, ebullient piece, an ode to ingenuity, perseverance and the power of music. It was a prime example of the cultural reporting — gentler and more hopeful — that Simon had added to his repertoire in recent years.

Simon is said to have been working with his daughter, Tanya, on a piece about Ebola. We will almost certainly see it eventually on “60 Minutes.” But it's impossible not to be saddened by the realization that Simon, at age 73, was still going strong, still telling stories that were thoughtful and illuminating, stories that mattered. It's difficult to think of a reporter, electronic or print, who would be missed more.