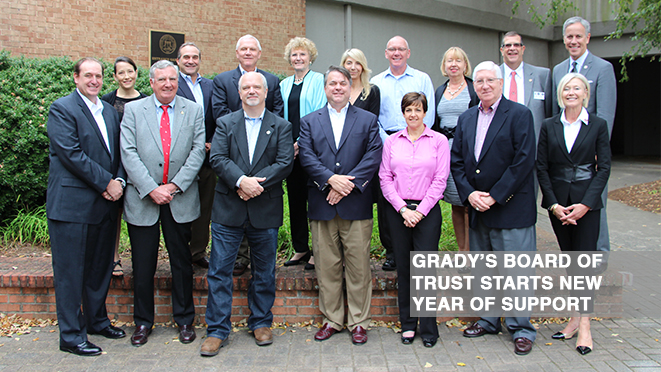 The Grady Board of Trust, one the college’s most influential boards of alumni and friends lending support and guidance, is set to begin a new year when it hosts its bi-annual meeting at Grady College Oct. 15, 2015.

“The Board of Trust exists to advance the cause of Grady College and represents an amazing collection of leaders from across the mass communication marketplace,” said Charles Davis, dean of Grady College.  “This brain trust supports the work that we do, offers insight and advice, and most importantly, forms an immensely rewarding social network. Some of my favorite days as dean have been spent with these amazing people.”

In addition to serving as ambassadors and leaders who can attract resources to the college, the BOT is the sponsoring organization of the Grady Fellowship, a recognition of alumni and friends who by virtue of their accomplishments and service are members emeritus of the BOT.

Jeff Jowdy has served as chairman of the BOT since March 2015.

“There is a special spirit and passion among the board,” Jowdy said. “The members include alumni but also many communications professionals who have adopted the college because they recognize its heritage, its level of excellence, its vital role and the potential that Grady can achieve.”

The BOT will welcome four new members when it meets. Those joining the BOT include:

Harry Chapman (ABJ ’67) — Chapman is a retired news anchor from WTVF CBS (NewsChannel5) in Nashville, Tenn., where he worked for 35 years. In 1974, he teamed with Oprah Winfrey to be Nashville's first male-female anchor team. He is currently the director of development and major gifts for Belmont University (Tenn.)

Henry Grady, III — Grady is the great grandson of the college’s namesake and is managing director in Healthcare Investment Banking at SunTrust Robinson Humphrey. Grady is a graduate of UGA’s Terry College of Business and serves on numerous boards of directors including Grady Health System and The Westminster Schools.

Tim Huban — Huban is managing director of GE Capital, Telecom, Media and Technology. He has been with GE Capital for 34 years and is a graduate of Bryant University (R.I.)

Diana Wilkin — Wilkin is managing director of Twelve 24 Media, a broadcast and media consulting firm. In addition, she is a thought leader for SPROCKIT and an advisory board member for BWG Strategy. She served as president of CBS affiliations from 2008 to 2014. Wilkin graduated with a degree in business finance from the University of Southern California.

Other members of the BOT include: