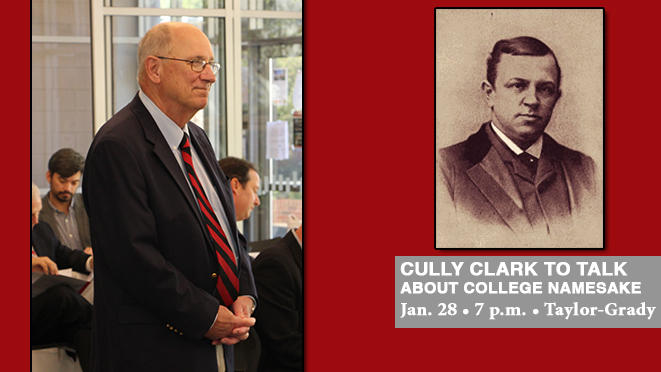 The lecture, “Henry Grady and the New South,” will take place at 7 p.m. on Thursday, Jan. 28, at the Taylor-Grady House in Athens. Clark is known as an expert on Henry Grady, and is the author of the recent book “Centennial: A History of the Henry W. Grady College of Journalism and Mass Communication at the University of Georgia.”

Clark's remarks will emphasize Grady's role in the New South Movement and how the assessments of it have evolved over time.  To research Grady is to learn that he and the movement are now considered racists.  Clark will also note how Grady became the principal champion of the movement in the three short years between his remarkable New South Address at Delmonico's in New York and his untimely death, December 23, 1889, at age 39.  He will demonstrate how Grady's coverage of a natural disaster, the Charleston Earthquake of August 31, 1886, vaulted him to prominence.

Clark’s research and writing has focused on the New South Movement and Civil Rights.  His book The Schoolhouse Door: Segregation's Last Stand at the University of Alabama  (Oxford 1993) made The New York Times Book Review's Notable Books list.  He is dean and professor emeritus at both the University of Alabama and the University of Georgia.  Clark retired July 1, 2013. Clark is currently working on a book to be titled, William Tecumseh Sherman, Henry Woodfin Grady, and the Making of Atlanta.  He will have a few words about its working thesis. Grady College Dean Charles N. Davis will introduce Clark.

The lecture is free and open to the public, but seating is limited. The event will take place at the Taylor-Grady House, 634 Prince Avenue, Athens. The house will be open for tours starting at 5:30 p.m. Overflow parking is located at 740 Prince Avenue. An exhibition of Henry Grady memorabilia will also be on display at the Athens-Clarke County Library, located at 2025 Baxter Street, Athens. For more information, call (706) 613-3650, ext. 343, or visit www.RSLAthens.org.