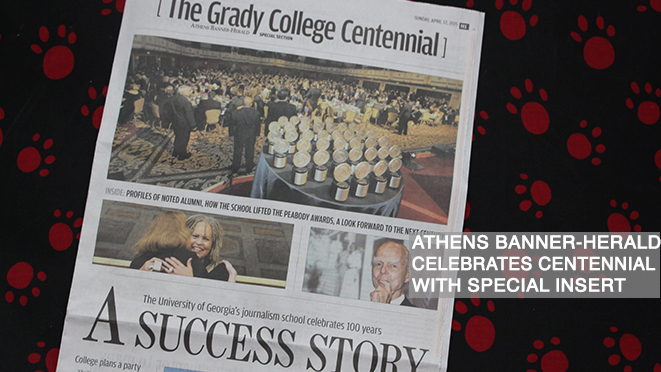 Next to the Red & Black, there are few newspapers that have had as many Grady College students and alumni write or take pictures for it over the years as the Athens Banner-Herald.  On April 12, 2015, the Banner-Herald saluted the college with a special insert heralding its past and looking forward to the future.

The insert included interviews with several notable alumni, a retrospective overview of the history of the college in a column written by Dean Emeritus E. Culpepper “Cully” Clark, an update on future initiatives by Grady College Dean Charles Davis, an overview of the Peabody Awards and a timeline of events over the past 100 years.  The features were interspersed with several current and historical pictures.

Below are links to the articles in the insert that can be found online*:

Charlayne Hunter-Gault: A history-maker with a storied career

Conrad Fink: An unforgettable mentor to many

Maxine Clark: Retail titan with stores around the globe

As it celebrates centennial, Grady prepares for next 100 years, by Dean Charles Davis

* Please note that non-subscribers will be limited in the number of articles they can access online.