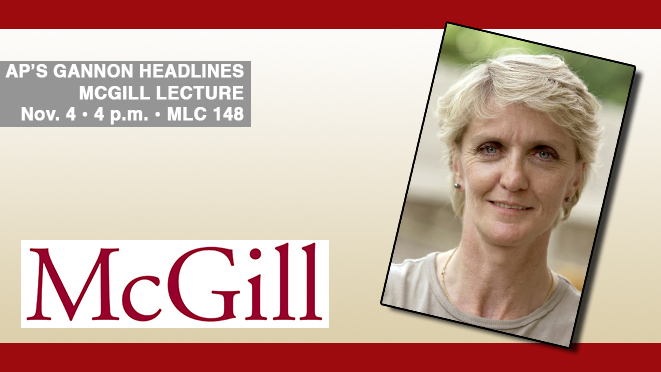 A journalist who has reported for nearly 30 years from Afghanistan, one of the world’s most dangerous and difficult countries, and this year’s recipient of the Grady College McGill Medal for Journalistic Courage, will give the 37th annual McGill Lecture.

Kathy Gannon, a correspondent for the Associated Press, will talk about “Journalism: Myth and Realities” on Nov. 4 at 4 p.m. in room 148 of the Miller Learning Center.  The lecture is free and open to the public.

In 2014, Gannon was attacked and badly wounded by Afghan security forces while covering the presidential elections. Her AP colleague, Anja Niedringhaus, was killed in what was the first known case of security forces attacking journalists in Afghanistan.  Gannon had been reporting from Afghanistan since 1986, covering Taliban rule in the 1990s, the post-9/11 U.S. invasion in 2001 and subsequent 13-year war.

The McGill Lecture is the capstone event of the 9th annual McGill Symposium, which will be held earlier that day in Grady College’s Peyton Anderson Forum, according to Diane Murray, who directs the McGill program for journalistic courage.

The McGill Symposium will feature the following journalists talking about what journalistic courage means and how it is exemplified by reporters and editors:

•    A conversation about the aftermath of Hurricane Katrina will take place with Sandy Breland, current vice president of Raycom Media and former station manager of WWL-TV (New Orleans); Anita Lee, staff writer for the SunHerald (Biloxi, Miss.); and Stan Tiner, retired executive editor and vice president of the SunHerald. The session will be moderated by Janice Hume, the Carolyn McKenzie and Don E. Carter Chair for Excellence in Journalism and head of the Department of Journalism.

•    Barbara Glickstein, co-director of the Center for Health, Media and Policy at Hunter College will discuss “Dying in America,” a look at end of life care. Pat Thomas, the Knight Chair in Health and Medical Journalism, will moderate.

•    Issac Bailey, former columnist for the Myrtle Beach Sun and Glenn Smith, Watchdog/Public Service Editor for the Charleston Post and Courier, will discuss “Covering Race in the South,” through the lens of their coverage of the Charleston AME shootings and the Confederate flag debate in South Carolina. Valerie Boyd, the Charlayne Hunter-Gault Distinguished Writer-in Residence, will moderate.

•    In the concluding session, Appalachian documentary photographer Roger May will discuss and show his work “Looking at Appalachia.” Mark Johnson, senior lecturer, will moderate.

Awarded the McGill Medal for Journalistic Courage in spring 2015, Gannon will receive her medal on Nov. 3, in a 4 p.m. ceremony in the Peyton Anderson Forum.

For more than three decades, the McGill Lecture has brought significant figures in journalism to the University of Georgia to help honor Ralph McGill’s courage as an editor.

McGill, while editor and publisher of The Atlanta Constitution, was regarded as the “conscience of the south,” using the newspaper’s editorial pages to challenge segregation in the 1950s and 1960s. McGill was awarded a Pulitzer Prize in 1958 for long, courageous and effective leadership.

While the McGill Lecture is open to the public, the McGill Symposium is open only to McGill Fellows. Media passes are available upon request.