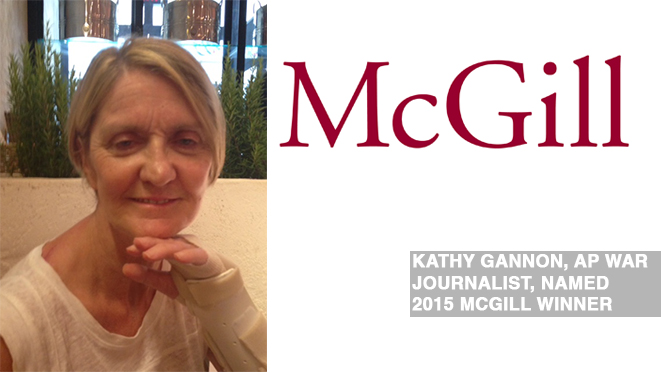 A journalist who has reported for nearly 30 years from Afghanistan, one of the world's most dangerous and difficult countries, is this year's recipient of the McGill Medal for Journalistic Courage.

Kathy Gannon, a correspondent for the Associated Press, will receive the medal from the University of Georgia Grady College of Journalism and Mass Communication and its McGill Program in Journalistic Courage during a ceremony this spring.

In 2014, Gannon was attacked and badly wounded by Afghan security forces while covering the presidential elections. Her AP colleague, Anja Niedringhaus, was killed in what was the first known case of security forces attacking journalists in Afghanistan.

Gannon had been reporting from Afghanistan since 1986 — covering Taliban rule in the 1990s, the post-9/11 U.S. invasion in 2001 and subsequent 13-year war — and was not indifferent to the risks, according to AP editor Sally Jacobsen, who nominated Gannon on behalf of the news service.

“The cornerstone of her work was always to get out of the halls of power and as close to the Afghan people she was writing about,” Jacobsen wrote. “She embedded with Afghan forces, both the military and police, as they went on combat missions because she wanted to see firsthand the lot of the common fighters.”

Gannon said: “Courage is a quality that is difficult to measure but one our profession is increasingly demanding as a greater number of journalists come under attack, press freedoms are targeted and practicing freedom of speech can be a death sentence. The McGill Medal for Journalistic Courage recognizes the need to honor that quality. It is with a tremendous amount of pride I accept this honor and want also to say I share it with all those brave local journalists, who are the heroes of our profession.”

The selection was made by the 2014-2015 class of McGill Fellows, 12 undergraduate and graduate students chosen for academic achievement, practical experience and leadership. McGill Fellow Katy Roberts, a Senior journalism major from Johns Creek, wrote the briefing on Gannon.

“What makes Gannon unique,” Roberts wrote, “is her ability to connect with the local Afghans, gaining all sides of the story, even if it means going to the most dangerous parts of the country and putting her life at risk.”

Six other journalists were nominated.

The McGill Medal, now in its seventh year, is the latest development in the growth of the McGill program at UGA's Grady College.

For 36 years, the McGill Lecture has brought significant figures in journalism to UGA to help the university honor McGill's courage as an editor. In 2007, UGA added the McGill Symposium, bringing together students, faculty and leading journalists to consider what journalistic courage means and how reporters and editors exemplify it.

“All of this is for a single purpose: to advance journalistic courage,” said John F. Greenman, professor and Carter Chair in Journalism. Greenman and Diane H. Murray, the Grady College's director of alumni relations and outreach, oversee the McGill program. For more information on the program, see the McGill website.