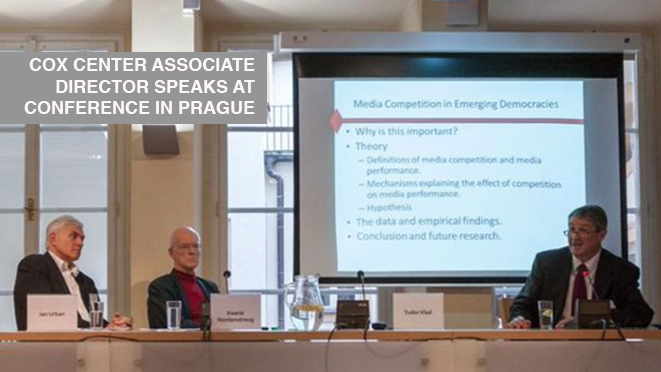 The media market in Central and Eastern Europe has been oversaturated since the 1989 fall of communism in the region, Grady College of Journalism and Mass Communication faculty member Tudor Vlad told a group of international journalists, scholars and politicians at a conference in Prague last month.

Vlad, who serves as the associate director of the University of Georgia James M. Cox JR. Center for International Mass Communication Training and Research, was a speaker at “25 Years After: The Challenges of Building the Post-Communist Media and Communications Industries,” held Nov. 20-22 at New York University Prague. The conference was organized by KEYNOTE and Transitions Online in partnership with the European Communication Research and Education Association, Charles University and the International Studies Association. Additional support was provided by the International Visegrad Fund and the U.S. Embassy in the Czech Republic.

For Vlad's presentation, “Can we talk about a successful transition of the media from the communist model to what we see today?”, he introduced the concept of hypercompetition.

“Our research suggests that the number of media outlets in Eastern Central Europe is way too high for the advertising and sales revenues,” Vlad said.

In contrast to traditional ad-driven media outlet models, many business people, oligarchs and special interest groups in Central and Eastern Europe over the past few decades have funded their own media outlets as a way of driving narratives.

“Usually competition produces better products with lower prices and more diversity,” Vlad explained. “In this case, hypercompetition actually produces low products, meaning that the quality of the journalism is low.”

Vlad shared data he gathered along with Lee B. Becker, director of the Cox International Center; Ann Hollifield, Thomas C. Dowden Professor of Media Research at UGA's Grady College; and two colleagues from Sweden, Eva-Maria and Adam Jakobsson. Case studies of Romania and the Republic of Moldova further illustrated the researchers' theory.

“For journalists, sometimes it's unpleasant and shocking to hear that we have too much media. But that is the case,” Vlad said.

While at first some of the 120 conference attendees seemed resistant to the data, several approached Vlad after his talk and offered anecdotal evidence of hypercompetition in their countries. That feedback inspired him to look into developing a formula that could calculate a rate of healthy media competition.

But Vlad is not very optimistic.