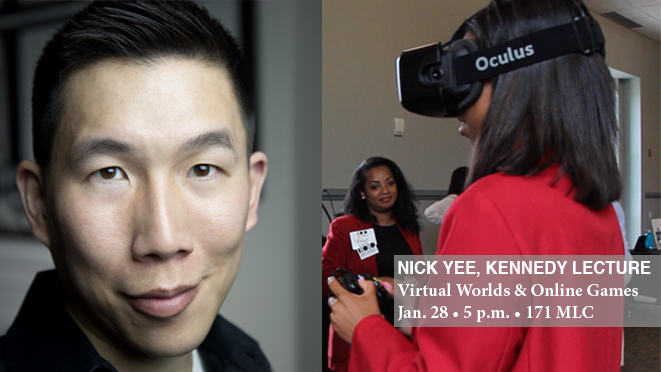 Nick Yee, co-founder and analytics lead at Quantic Foundry, a consulting practice specializing in game analytics, will share more than a decade’s experience studying gamer behavior and the effects of virtual realities.

The lecture, “The Proteus Paradox: How Virtual Worlds and Online Games Change Us—And How They Don’t,” takes place Thursday, January 28 at 5 p.m. in 171 MLC and is free and open to the public.

It is part of the Jim Kennedy Lecture series presented by the Department of Advertising and Public Relations at Grady College.

Virtual worlds and online games are stereotyped as escapist fantasies where people are free to play with their identities, but more often than not, the opposite is true. Rather than being digital utopias, virtual worlds perpetuate social norms from the offline world and even inspire superstitious rituals. And the change that does occur is often out of our control, driven by novel and powerful virtual tools that can modify how we think and behave. In the lecture, Yee will share the potential offered through virtual realities as evidenced through his extensive research on the effects of virtual worlds and online games.

“Nick is one of the best known scholars and practitioners in the gaming world,” said Grace Ahn, assistant professor of AdPR at Grady and former colleague of Yee’s at Stanford. “Nick has done a lot of survey work quantifying how people behave and think and how the gaming experience changes their real-world experiences.”

Yee has conducted many experiments examining how virtual worlds and digital avatars can be used to break the rules of physical reality in productive ways, and has leveraged a variety of data mining and statistical analysis techniques to make sense of large-scale player behavior data.

His specialties include human-computer interaction (HCI), data science, psychology of virtual worlds, avatars and games, personality and motivation in gaming contexts, and survey and experimental research and design.

Yee’s work has been mentioned in the New York Times, the Wall Street Journal and CNN International. Yee holds a Ph.D. from Stanford University.