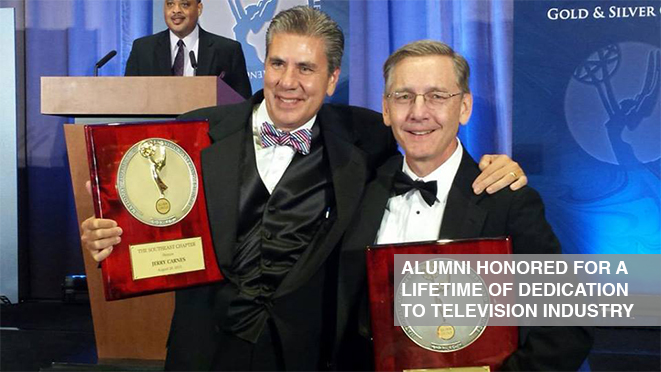 Two Grady College alumni were among this year’s recipients of The National Academy of Television Arts and Sciences [NATAS] Southeast Chapter’s most prestigious awards.

Jerry Carnes (ABJ ’82) of WXIA-TV 11Alive and Randy Travis (ABJ ’82) of WAGA-TV Fox 5 Atlanta were inducted into NATAS Silver Circle during a ceremony on Aug. 28.  The recognition honors outstanding broadcasters with at least 25 years of experience. Bob Neal, who is a co-instructor of Grady Sportsouce this semester, was also one of the inductees. Another Grady alum, Monica Pearson (MA '14), hosted the event.

Congratulations to all of the award winners.  The following biographies appear on the NATAS’ website:

Jerry Carnes was born in Atlanta, married an Atlanta native and bleeds Bulldog red and black. 11Alive has been a part of his life for many years, having started as a college intern during the summer of his junior year at UGA. After 25 years at 11Alive as an investigative journalist, Carnes took on the challenge of Commuter Dude.  He fights Atlanta traffic and cringes when he careens into a pothole. Jerry’s broadcast career took him on a whirlwind across the south, reporting for WRBL-TV in Columbus, GA, WAAY-TV in Huntsville, AL, and WSPA-TV in Greenville, S.C., before accepting a job with WXIA.  Jerry and his wife, Caddy, and their three children reside in Dunwoody.

For the past 40 years, Bob Neal has excelled both in television and radio at the national and local level. Currently, Bob is teaching sports journalism at the Grady College of Journalism and Mass Communication. For 23 years, Bob was a familiar voice for Turner Sports on its national NBA coverage for TNT and TBS for telecasts. He served as news and sports director of WXIA-TV in Atlanta. He has been the anchor of “Talkin’ Football,” “Talkin’ Hoops,” and “SEC Hoops Tonight,” in addition to his current hosting of “Play to Win.” Neal is the recipient of five regional Emmy awards, three AP awards, a share of five national Emmy awards, and the 2012 Lindsey Nelson Award for career contributions in sports broadcasting.

Randy Travis joined FOX 5 Atlanta in 1990 as a reporter. In 1994 he became an investigative reporter for the FOX 5 I-Team. His stories have closed down businesses that misled the public, exposed government waste and sent people to prison. Before joining FOX 5, Randy was a reporter for WMC-TV in Memphis, Tenn., WYFF-TV, and WMAZ-TV. Randy has won several regional Emmy awards for his investigative work. Twice he has been honored with the national Edward R. Murrow Award. One of those stories exposed the illicit sale of crack cocaine supplies in metro convenience stores. Randy is a 1982 graduate of the University of Georgia. He lives with his family in metro Atlanta.