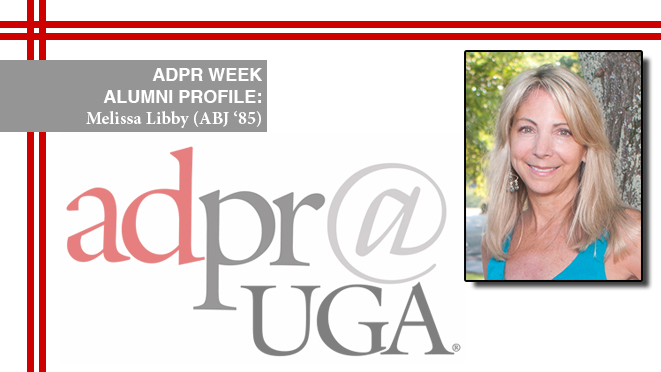 In honor of AdPR Week, we are profiling five Grady College alumni who are using their Grady education in the creative industries they serve. These individuals provide a positive influence on our current students so that after graduation, they will also prosper in their selected fields. For other alumni profiles, please see: Elizabeth Elmore (ABJ ’08), Elizabeth Howard (ABJ ’15) and Jason Kreher (ABJ ’00).

When Melissa Libby graduated in 1985, there was no such thing as a public relations agency in Atlanta specializing in restaurants. Today, she is president of one of the most successful agencies specializing in promoting and opening restaurants: Melissa Libby & Associates.  Libby opened her agency in 1992 following a career in hotel public relations. She has written two cookbooks and is a certified Kansas City Barbecue judge. She also serves on the Grady College Board of Trust.

Following are excerpts from a conversation with Libby in August, 2015:

Grady College: How did you get your start?

Melissa Libby: My first job was doing PR in the hotel industry. At that time, there were not many nice restaurants in Atlanta. I always wanted to own my own business, but I never thought about specializing in a particular industry. In 1992, I decided it was time to start that business. Because I had been in the hospitality business, those were the contacts that I had and those were the people who started to give me work. With the 1996 Olympics coming, Atlanta was becoming a little more cosmopolitan and our leaders became more aware that we needed more good restaurants. So, just as I was building my business, Atlanta was building a restaurant industry and things really just started happening. My epiphany happened during a conversation with George McKerrow, founder of LongHorn Steaks and my client at Canoe restaurant. I had maybe two or three restaurant accounts and I thought that was all anyone could have without conflicting with one another. When George decided to open a new restaurant next door to one of my current clients, I offered to resign the other account to avoid conflict. George said, “well, Melissa, as far as I'm concerned, the PR person with the most restaurants has the most power and that is who I want representing me.” And that is when I realized I could build a business off of one industry and that it would be valuable for my clients to have someone who really knew the food media and who really knew the restaurant industry.

GC: What makes you successful in the restaurant PR industry?

GC: What skills did you learn at Grady that have helped you in your current position?

ML: At Grady I learned to be curious and to look for opportunities when maybe it seemed there weren't any. The PR education, in my opinion, is also an entrepreneurial education. Pitching stories and seeking opportunities like you do in PR are the same when running your own business. How you look at things and how you set yourself apart — all of those things you have to do as a business owner you also have to do as a good PR person. I completely credit Grady with all of those skills. I have Grady employees and interns and I have run across people from the past 20+ years who have graduated from Grady and I feel they all have these attributes.

I also was very active in PRSSA. I was president and we started Creative Consultants while I was there. That was a huge leadership education for me.