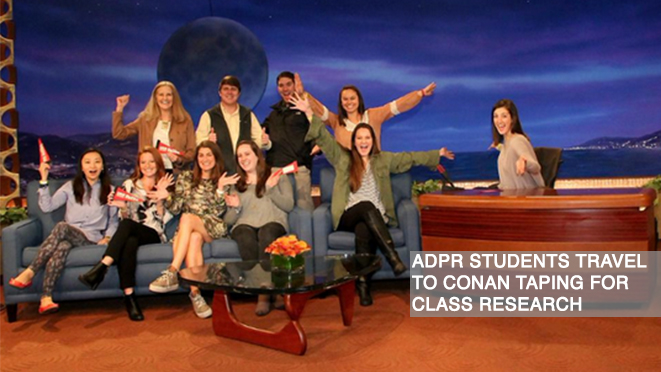 It’s not every University of Georgia class that makes it possible for students to fly out to Los Angeles to watch a taping of “CONAN,” one of the most popular late-night television shows.  However, for eight students in Karen King's and Juan Meng’s joint advertising and public relations class, a 24-hour trip to the West Coast was necessary research.

The reason for the trip was to gather background for a class project for Turner Broadcasting. This is the fourth year that Turner Broadcasting has partnered with a Grady College campaigns class and this semester the group is assigned to work on a campaign for “CONAN.” To complete the research, Turner arranged for the students along with King and Meng to travel to L.A. to see a taping of the show and to tour the set.  Client confidentiality rules prevent details about their research from being discussed.

Choosing which students would go was one of the most challenging parts of the trip. Each of the four campaigns teams was allowed to designate two students to go. Each team decided to do a random draw.

The trip lasted about 24-hours so there was little time to do anything else other than take care of the business at hand.  The students arrived in L.A., had lunch, went to the taping, toured the studio, had dinner, and flew back to Georgia the next morning.

“We told the students to think of it as their first business trip,” said King, a Jim Kennedy Professor of New Media and a professor of advertising at Grady College.

Once at the taping, the students started taking notes.

“We were able to gather insights and make observations that would have been otherwise impossible to uncover from just watching the show from home,” said Logan Frost, an advertising major from Lafayette, Georgia.  “Being able to see the audience members' faces when Conan stepped foot on set told me more about the show than any amount of ‘normal’ research ever could.”

The group was also able to talk with several people from the “CONAN” production team to gain insights into the development of the show.  They spoke with members of the team that handle digital and social media for the show and the creator of the Clueless Gamer segments.

“Seeing the show live made me feel more connected to our campaign and helped me better visualize its potential,” added Kristen Zeck, a public relations major from Atlanta. “One thing I didn't know from watching the show on TV is that they film the entire episode in one take. This really impressed me, because not only does it show how prepared Conan is before filming, but it's also a testament to his quick wit when something unexpected happens.”

“The dynamic of the show and the taping itself gave them a great learning experience,” Meng, an assistant professor of public relations, added.

The teams in the campaigns class will finish the campaign and present their ideas to a group of Turner executives by the end of the semester.

The course calls for challenging timeline, but the students are up to the task.