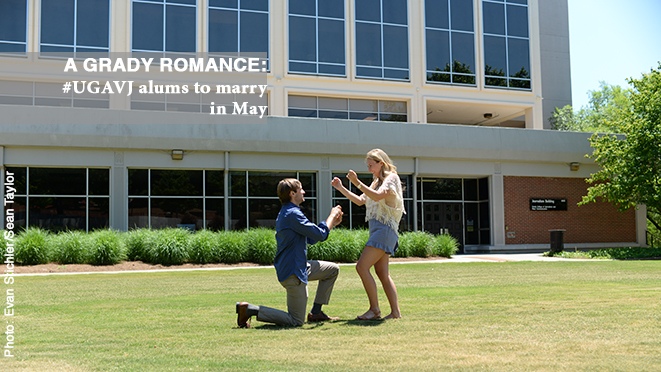 Everyone loves a story of romance and here at Grady College around Valentine’s Day, we especially enjoy stories where we had a little something to do with the matchmaking.

When Wes Blankenship (ABJ ’12) officially proposed to Brittany Robertson (ABJ ’13) in May 2015, he knew Grady College was the place, because that is where they reconnected after nearly 10 years apart.

The two Lawrenceville, Ga., natives actually knew one another from being in the same fourth-grade class; however, that summer before fifth grade, Robertson moved to St. Louis. It was their senior year at UGA in Mark Johnson’s photojournalism class that the two reconnected and they have been inseparable since.

When Blankenship, a multimedia journalist and sports anchor at 13WMAZ, knew he was going to propose there was no question about where it was going to take place, but it took a lot of careful planning. Robertson had made plans to be in Athens for a girls weekend, but unknown to her, Blankenship was making plans to enjoy her time a little differently. To make sure she had no idea what was being planned, he even planted fake Snapchat and Instagram messages to throw her off about his work schedule that weekend, and he had their friends do the same.

“I was completely surprised,” Robertson said. “After a morning downtown, the girls drove me past Wes' fraternity house and he was sitting outside waiting for me with a UGA pompom. Once I saw him all dressed up, in Athens, on a Saturday…he works as a weekend sports anchor…I knew.”

The two walked all around campus, retracing their romance during their fifth year of college.  Their next-to-last stop was Grady College.

“We stopped at Grady and he took me into the classroom where we reconnected that last year at UGA,” continued Robertson, an identity designer and brand strategist at Atlanta-based Matchstic. “Wes had ‘one last project’ to show me on the screen where we'd had many UGA visual journalism critiques. Afterwards, Wes took me out on the front lawn of Grady to propose. I was so zoned in on Wes and all of his sweet words that I failed to notice two of our friends were snapping away.”

Fortunately, Blankenship had arranged for two of their photojournalism friends, Evan Stichler and Sean Taylor, to capture the memories.

The newly-engaged couple, along with Stichler and Taylor, made their way through north campus for one last big surprise— a toast at Allgood, their favorite Athens hang-out.

“It was there that Wes had gathered slews of our friends and family from all over the country for his second big surprise of the day,” Robertson said. “As we walked upstairs there were huge signs, loud yells and it turned into a wonderful party of celebration that lasted throughout the night.”

Robertson and Blankenship will be married May 28, 2016, in Athens, of course.