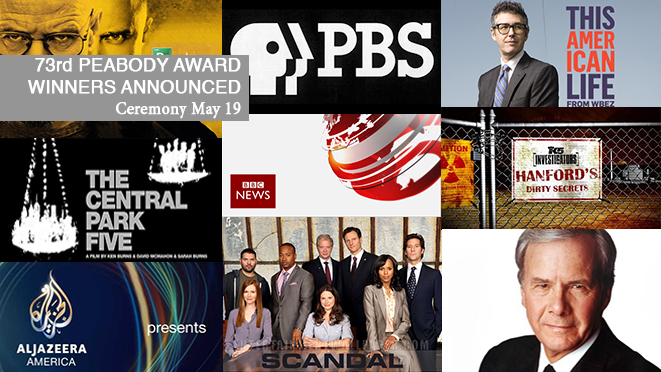 A record 46 recipients of the University of Georgia’s 73rd Annual Peabody Awards were announced today on “CBS This Morning” and www.peabodyawards.com. The winners, chosen by the Peabody board from almost 1,100 entries, comprise the best in electronic media for the year 2013.

The latest Peabody recipients include a pair of high-profile political melodramas, Netflix’s corrosive “House of Cards” and ABC’s juicy “Scandal;” “A Chef’s Life,” a stereotype-cracking nonfiction serial about a farm-to-fork gourmet restaurant in South Carolina’s low country; “Burka Avenger,” an animated Pakistani series aimed at empowering girls; “A Needed Response,” a YouTube viral video created by two University of Oregon students that succinctly criticizes rape culture and champions r-e-s-p-e-c-t for women; and two distinctive probes of the dangers of brain injury in professional football, “FRONTLINE’s League of Denial: The NFL’s Concussion Crisis” and ESPN’s “Outside the Lines: NFL at a Crossroads: Investigating a Health Crisis.”

“The quality of storytelling in electronic media continues to increase year-after-year, across platforms, producing organizations and nations,” said Dr. Jeffrey P. Jones, director of the Peabody Awards, which are administered by UGA’s Grady College of Journalism and Mass Communication. “The unprecedented number of awards we gave this year reflects this fact. There simply are a larger number of stories that deserve our attention as citizens and consumers. And what a wonderfully rich and satisfying set of stories we’ve called attention to this year!”

International Peabody winners include the Philippines’ GMA Network for coverage of the assault and aftermath of Supertyphoon Yolanda (Haiyan); “The Returned,” an eerie, elegant supernatural drama from France; the realistic, compelling Danish political serial “Borgen;” and BBC World News’ in-depth reporting from “Inside Syria’s War.”

Local Peabody recipients included CBS-owned WBZ-TV and WBZ Newsradio for their peerless extended coverage of the Boston Marathon bombings and the ensuing dragnet; KING-TV in Seattle for its revelations about nuclear-waste leaks and mismanagement at the Hanford, Washington, storage facility; Nashville station WTVF-TV’s reports about Tennessee officials’ involvement in shady business deals; and an exhaustive investigation of Louisiana political contributions – who gives, how much, and what does it buy – that combined the resources of New Orleans station WVUE-TV, The Times-Picayune and NOLA.com.

Issues of race and ethnicity were explored in several impressive recipients: “The African Americans: Many Rivers to Cross with Henry Louis Gates Jr.” and “Latino Americans,” both shown on PBS, traced the history and the ongoing influence of peoples whose presence here predates the forming of the United States. Ken Burns’ “The Central Park Five,” also on PBS, revisited a infamous New York rape case that wrongly sent five black and Latino teenagers to prison. National Public Radio reporter Michelle Norris’ “The Race Card Project” used six-word summations of listeners’ thoughts about race as the basis of remarkably telling feature reports.

A trio of documentaries addressed difficulties facing student and educators in poor, high-crime communities. “This American Life’s” two-part “Harper High School” on radio and PBS’s “180 Days: A Year Inside an American High School” provide richly nuanced stories of students coping with challenges from child-rearing to gun violence. “Best Kept Secret,” also shown on PBS, took viewers inside a poor Newark, N.J., school with an unexpectedly exemplary program for autistic and other special-needs students.

Culture and the arts were represented by such Peabody winners as “TCM: Story of Film,” which combined a 15-part retrospective with telecasts of more than 100 classic movies, and “Great Performances: Broadway Musicals: A Jewish Legacy,” a tuneful celebration of the influence of composers such as Irving Berlin, Oscar Hammerstein III and Stephen Sondheim. Sondheim had a documentary all to himself as well: HBO’s “Six by Sondheim,” which combined his ruminations on composing with archival and fresh performances of some of his greatest songs. CNN’s “Anthony Bourdain: Parts Unknown” was recognized for its unique recipe for blending culinary and cultural reporting.

The rich array of documentary winners included HBO’s tender “Life According to Sam,” the story of a teenager dealing with an accelerated aging disease, and the cable network’s “Mea Maxima Culpa: Silence in the House of God,” a frank report about a Catholic priest who abused more than 200 students at a Milwaukee school for deaf.

Other documentary winners included “The Law in These Parts,” a “POV” film exploring the alternative legal system Israel developed for governing its occupied Palestinian territories, and three “Independent Lens” productions: “How to Survive a Plague” chronicled the crucial role AIDS activists and organizations like ACT UP played in saving lives and hobbling the epidemic. “The House I Live In” took stock of what we have to show for our 40-year “war” on drugs, and “The Invisible War” assessed the shameful problem of rape in the U.S. military and why it persists.

A pair of documentaries from Al Jazerra America’s “Fault Lines” series demonstrated its broad reach and aggressive journalism. “Haiti in a Time of Cholera” examined the epidemic that has erupted since the 2010 earthquake and underscored the likelihood that U.N. peacekeepers are the source. “Made in Bangladesh” found evidence of prominent American retailers turning a blind eye to the dangerous practices of foreign subcontractors, practices that led to horrible tragedies like the clothing-factory fire in Bangladesh that killed more than 100 people.

Awards in news included a personal citation to Tom Brokaw, author and former anchor of “NBC Nightly News,” and another to the current NBC team for “In Plain Sight: Poverty in America,” a multi-platform assessment of poverty’s many faces and forms today. A Peabody went to “One on One with Assad,” a “CBS This Morning” segment in which co-host Charlie Rose civilly but persistently pressed Syria’s president for explanations of his war against his own countrymen. And the public radio series “Reveal” was honored for “The VA’s Opiate Overload,” a shocking report about overdose deaths a Veterans Administration hospitals.

The Peabody medallions will be formally presented on May 19 at a luncheon ceremony at the Waldorf-Astoria in New York City. Ira Glass, host and producer of “This American Life,” which now boasts five Peabodys, will be the emcee.

The Peabody Awards, the oldest in electronic media, are considered among the most prestigious and selective prizes. The Peabodys recognize excellence and meritorious work by radio and television stations, networks, webcasters, producing organizations and individuals. The 16-member Peabody Board is a distinguished panel of television critics, industry practitioners and experts in culture and the arts. Selection is made by the Board following review by special screening committees of UGA faculty, students, and staff. For more information regarding the Peabody Awards program, visit www.peabodyawards.com or follow @Peabody_ Awards on Twitter.

Established in 1915, the Grady College of Journalism and Mass Communication offers undergraduate majors in advertising, digital and broadcast journalism, magazines, newspapers, public relations, publication management and mass media arts. The college offers two graduate degrees, and is home to the Knight Chair in Health and Medical Journalism and the Peabody Awards, internationally recognized as one of the most prestigious prizes for excellence in electronic media. For more information, see www.grady.uga.edu or follow @UGAGrady on Twitter.