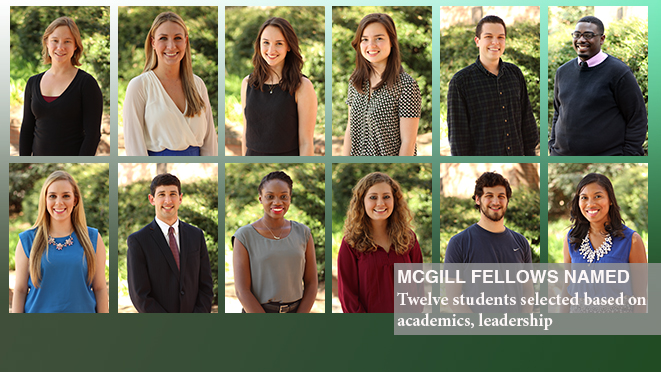 Twelve undergraduate and graduate students have been named McGill Fellows by the Grady College of Journalism and Mass Communication.

They were selected by a faculty committee “for their strengths in academics, practical experience and leadership,” said Diane Murray, public service faculty and Director of the McGill program in Journalistic Courage, who chaired the committee.

As a McGill Fellow, the students will participate in the McGill Symposium, which brings together students, faculty and leading journalists to consider what journalistic courage means and how it is exemplified by reporters and editors. The McGill Symposium will be held from 9 a.m. to 3 p.m. Wednesday, Nov. 4, 2015, in the Peyton Anderson Forum at the Grady College.

Later Wednesday, the McGill Fellows will attend the McGill Lecture, which will be presented by Kathy Gannon, special regional correspondent for Afghanistan and Pakistan for The Associated Press. She is the recipient of the 2015 McGill Medal for Journalistic Courage. The Lecture will be held at 4 p.m. in Room 148 of the Miller Learning Center.

Following the symposium, the McGill Fellows will help select the eighth recipient of the McGill Medal, awarded annually to a U.S. journalist whose career has exemplified journalistic courage.

Finally, the McGill Fellows will have first priority to enroll in a one-hour, independent study on journalistic courage, to be taught by Murray next spring.

This is the ninth class of McGill Fellows.

For more than 30 years, the McGill Lecture has brought significant figures in journalism to the University of Georgia to help us honor Ralph McGill’s courage as an editor.

McGill, while editor and publisher of The Atlanta Constitution, was regarded as the “conscience of the south,” using the newspaper’s editorial pages to challenge segregation in the 1950s and 1960s. McGill was awarded a Pulitzer Prize in 1958 for “long, courageous and effective leadership.”