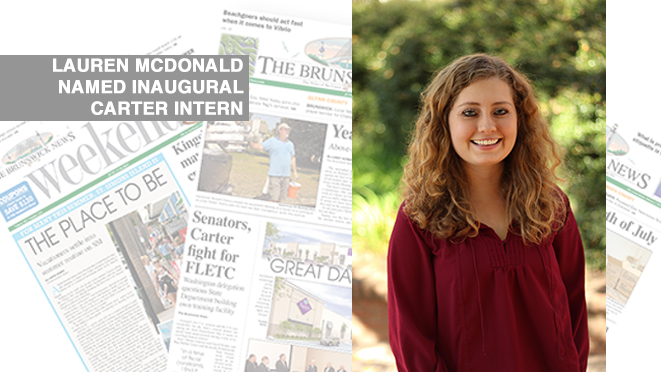 The University of Georgia’s Grady College of Journalism and Mass Communication has established the Don E. Carter Journalism Internship at The Brunswick News with journalism major Lauren McDonald as the inaugural Carter intern.

“I am so honored to be the first beneficiary of such a wonderful grant, without which I could not afford to spend a summer gaining experience in a field I am passionate about and hope to make a career in,” McDonald said of her internship, which begins this month.  “We're told constantly in Grady that we need to find outside experience, and this sort of grant makes that possible.”

McDonald, a recent journalism graduate of Grady College, is from Vidalia, Georgia. She was named a National Newspaper Association Foundation Fellow in 2015. While a student at UGA, McDonald worked as a reporter for The Red and Black; served as a Cox Poynter Leader Fellow and worked on the Mobile News Lab through the James M. Cox Jr. Institute for Journalism Innovation, Management and Leadership; and was named a McGill Fellow. Previously, McDonald has worked as an intern at The Vidalia Advance.

The funded internship is made possible by a generous donation from Carter (ABJ ’38) to promote journalism excellence at Grady College. A decades-long supporter of Grady College, Carter began his career as the editor-in-chief at The Red & Black before working as a reporter and editor at multiple newspapers across the county, including positions in Atlanta, New York City, Washington, D.C., and Miami. He was the founding managing editor of The National Observer before serving as vice president for news at Knight-Ridder until his retirement in 1982.  He received the Grady Dean’s Medal for Journalism Excellence in 2014. The Carolyn McKenzie and Don E. Carter Chair for Excellence in Journalism, currently held by Janice Hume, was named for Carter and his late wife.

Carter resides in Sea Island, Georgia, one of many communities along Georgia’s lower coast served by The Brunswick News.

During her internship, McDonald will along other journalists on a variety of reporting including local crime, politics and other community issues.

“While my experience at both The Vidalia Advance and The Red & Black were launching points for my journalism education, I am excited to have the experience doing real-deal community journalism, which I feel is one of the most important types of reporting,” McDonald said. “I also look forward to working with the many reporters at the Brunswick News and learning from them.”