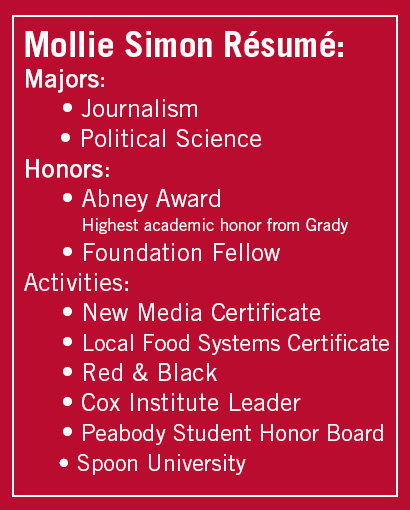 What Mollie Simon has accomplished in four years at the University of Georgia, many others would be proud to accomplish in a lifetime.

Her thirst for knowledge, interest in history and desire to make a difference — whether it’s through journalism or policy change — have propelled her be involved and capitalize on opportunities.

Simon has added another honor to her résumé, receiving the 2017-2018 George M. Abney Honors Award from Grady College, the college’s highest academic honor. Grady College presents the award annually to the senior who has achieved the most impressive record in the Honors Program.

In her four years at UGA, Simon has been awarded many honors including, among others, a University of Foundation Fellowship, Phi Beta Kappa and McGill Fellow. She has served as a New Media Scout, the Peabody Student Honor Board and president of the Palladia Women’s Honor Society. While her academic interests focus on her majors of journalism and political science, they also include certificates in New Media and Local Food Systems, and classes ranging from TEDxUGA, Reflections on Fighting Food Hunger and an independent study that focused on the portrayal of race in obituaries of southern politicians.

Keith Herndon, director of the James M. Cox Institute for Journalism Innovation, Management and Leadership, has mentored Simon during her time as a Cox Institute Innovation Fellow and a Cox Leader and says she has an incredible internal drive.

“When you find a student that has that work ethic and that intellectual curiosity combined, watch out,” Herndon said.

As she nears graduation, Simon shared more thoughts about her time her at the University of Georgia and Grady College. 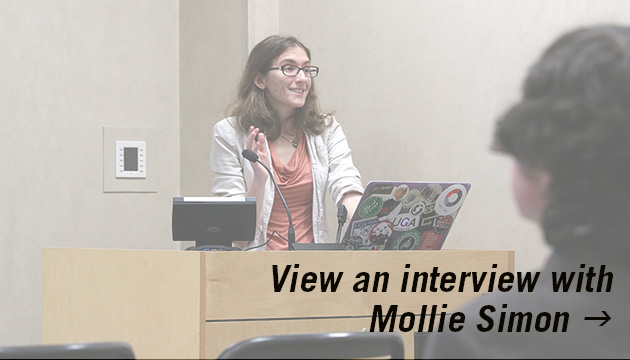 “It’s like the Buzz Feed of food for college students,” Simon jokes.

Simon began her writing at the Red & Black serving as an investigative reporter and administrative beat reporter, but has since transitioned into an archivist role, pulling content from older issues and sharing them via social media. A lot of the content pulled either relates to current stories or reflects on stories written on this date as far back as 1893. Her role has brought her full circle at the Red & Black since she serves as a resource for current reporters wanting to fact-check or find older content related to their current stories.

“It’s really fun and I’ve gotten to learn a lot about UGA history from that” Simon said.

She adds that one of her pieces of advice to new students is to learn about UGA history.

“We have a really complicated history. It’s not all good. Learning UGA’s history has made me think about the campus and how to have pride in my school and how I can make sure that pride can be available to everyone,” Simon said.  “I would encourage people to learn about the campus and learn about the names on the buildings and what it means, because I think those things matter. We should be proud of where we go, but we should also be cognizant of the history, and also the history of segregation and even what it means to be an LGBTQ student on this campus. That’s recent memory but it is easy to forget because of the progress that’s been made. Cheer on the Dawgs on a Saturday but also be willing to address the fact it’s a big institution and it’s complicated and there’s a lot to talk about.”

“They were all really cool experiences,” Simon said. “I went to South Korea with the Foundation Fellows and Dr. (Hyangsoon) Yi who we traveled with is really an incredible professor and there were times we were getting up really early to study rituals at the temples were staying at. There are times I remember thinking ‘it’s 4 a.m. and we are getting a lecture…this is amazing.’ Everything was a teachable moment. South Korea was a really good learning experience. We went to a monastery where the people are living such a diametrically opposite life than we think of  and the things we focus on that it left me with a lot to reflect on.”

Through her coursework, especially in food systems, Simon has become even more aware of her growth in considering societal affects: “The questions I was asking as a senior were very different than the questions I was asking as a freshman, somewhat because of learning about the topic, but also because I wouldn’t have worried about issues like that of class and race. Those were on my mind, but I didn’t have an understanding of them. I can see that I have become more critical of my place—how people in my position and how being a white woman who has come from a very fortunate upbringing and has set me up for successes and how I need to make sure I am passing that awareness along. I want to make sure that I can build people up and do positive things.”

Simon has so many interests ranging from food systems to journalism to library sciences, that it is hard to define what’s next. She will be spending the summer working on a Dow Jones News Fellowship at the Atlanta Business Chronicle and working out her lease in Athens.

“I think figuring out how all the things that I have done might add up to something and trying to think through things like ‘was that enjoyable and is that something I can do every day as a job?’ has been a bit challenging.” 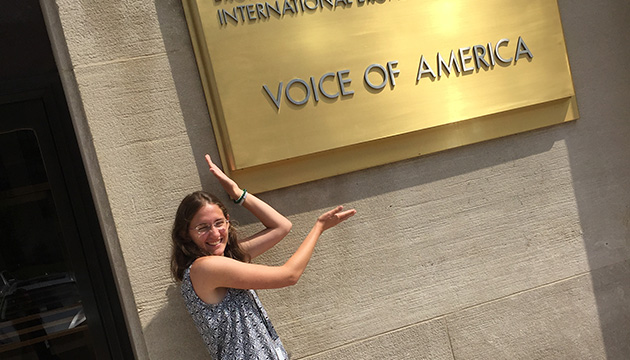 Mollie Simon discusses internships and gives advice to students as they work in their first job setting: