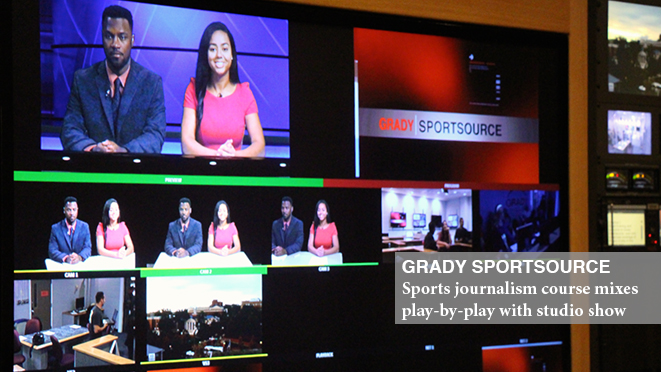 A new sports show anchored, edited and produced by Grady College students has hit the airwaves this fall. Grady Sportsource, a live, half-hour show that features extensive coverage of Athens-area high school football teams, is broadcast Fridays from 5 to 5:30 p.m. on UGA channel 15.1 and Charter Cable 181, as well as live-streamed on http://gradynewsource.uga.edu/.

Twelve students—many of whom are in the Grady Sports Media Certificate Program—put together packages, interview players and coaches, and shoot practices and games in preparation for the weekly show.  The course is led by two veterans of the industry: Bob Houghton, a long-time broadcaster and president of the Georgia Association of Broadcasters; and Bob Neal, a sportscaster with more than forty years in television and radio at the national and local level.

“The journalism of sports is different in that there’s a specific language and culture,” said Neal, who guides the students in the production of the show.  “Being a sports journalist requires an additional set of standards and knowledge about how to do it.”

He explained, “One of the things you do in sports that you don’t do as much in news is graphics, because sports is about lists, rankings, standings and statistics.  All of that has to do with full-screen, lower third graphics and how to learn to make those presentable, use them as a journalism tool and then write copy that supplements them.”

In addition to the studio show, students were tasked with providing play-by-play coverage of local football games.  For eight weeks, the class was divided into two groups that rotated between the show production and play-by-play.

Students quickly learned that preparation is key in the unscripted situation of play-by-play, according to Houghton, who managed that portion of the curriculum.

“You can’t just show up at a game and start talking,” Houghton said. “There’s a lot of preparation, and once you get the information, you still have to learn how to use it comfortably.”

Like the studio show, those participating in play-by-play alternated between all of the roles—cameraman, director, play-by-play, color commentator, sideline reporter and executive producer—in order to gain experience with each.

“Play-by-play was live action, unscripted announcing that I could put my own personality into,” said Zack Watson, a senior digital and broadcast journalism major who dreams of a career in entertainment news.  “I also got to watch live football while doing it—that's pretty awesome.”

Play-by-play didn’t come as naturally for Celia Palermo, a public affairs journalism junior.  But she improved along the way, she said.

“I'm better at the analysis side of things so being able to call games was something I struggled with,” Palermo said.” I got better at play-by-play simply by watching more football and learning the more nitty-gritty details about the game, like its history. It's all about having things in your back pocket to be able to talk about if something goes south.”

Palermo believes that the skills she’s gained in Grady Sportsource are bringing her closer to her goal of becoming a professional sports reporter.

“Grady Sportsource has helped me by pushing me to produce the best possible content that I can. I've learned so much more about the high school sports world— more than I ever thought I would,” she said. “I've garnered good interview skills, honed in my on-camera persona, and tried new things like creating graphics and producing the show.”

Though challenging, Watson said Grady Sportsource has been a positive experience.

“Bob Neal and Bob Houghton know this business in and out. They know what they’re talking about and are great resources to know more about the industry,” he said. “If you have an interest in sports media and any level of football reporting, I would recommend the class. But only if you stay dedicated.”

Houghton agrees that dedication is important for success in the course.

“We wanted to try and have the same feeling about it that the students have about Newsource — the commitment, the expectation that more was going to be required of them than would be in a normal class,” said Houghton. “I think they’ve done that.”

Shows remaining this semester include:

The focus this semester is on the core television journalism, but there are plans to add a digital element next fall in addition to ramping up social media coverage across multiple platforms, Neal noted.