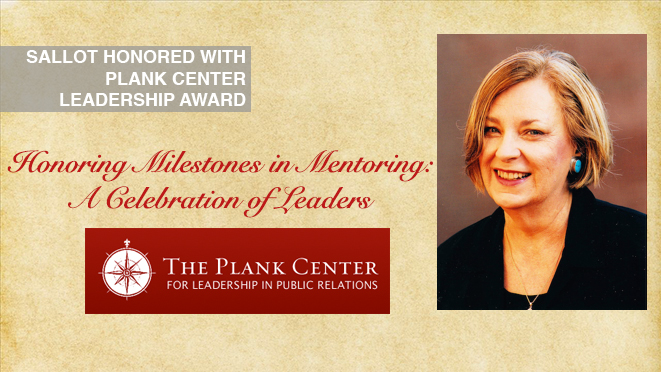 As one of Lynne Sallot's former students, Neil Hirsch, explains that Sallot is the best kind of mentor: an advisor, career counselor, therapist, connector, cheerleader and advocate rolled up into one person.

Thus, it is fitting that Sallot, public relations professor at the Grady College of Journalism and Mass Communication, is the 2014 recipient of the Milestones in Mentoring Educator Award presented by the Plank Center for Leadership in Public Relations. Named in honor of public relations leader and educator, Bruce K. Berger, the Milestones in Mentoring award recognizes educators who have been instrumental in mentoring students and future educators.

Hirsch (ABJ '00), manager of external communications at Novelis, Inc. and a former student of Sallot's at Grady College, was invited to introduce her at the awards ceremony.

“She was probably the toughest teacher I ever had at UGA,” Hirsch said in his remarks. “Her expectations of her students were incredibly high — but those were exceeded by her commitment to us. However, what I learned in her classroom was only one fragment of what Lynne has taught me over the years.”

Sallot has more than 25 years of experience in public relations, including heading her own PR firm, before beginning her teaching career as an adjunct professor at the University of Miami while earning her Master's and at University of Florida while earning her Ph.D. During her time in Florida, she realized she was a mentor and leader because students would express appreciation for her efforts to help them beyond the classroom and into their careers. She joined the Grady College faculty in 1993 and served as faculty advisor of the UGA Chapter of the Public Relations Student Society of America from 1993 to 1999 and as faculty coordinator of the annual PR Day at Grady College from 1994 through 2001.

“Dr. Sallot is very deserving on this award,” said Tom Reichert, Advertising and Public Relations Department Head at Grady College. “She is a dedicated mentor to so many students both past and present. Dr. Sallot has gone above and beyond to give students the direction and feedback they need, and the necessary push to get them started in the profession.”

In addition to her students and numerous teaching awards she has received over the years, Sallot is also very involved with PRSA. Prior to becoming an inducted member of the Georgia PRSA Chapter's Order of the Phoenix, Sallot received several PRSA honors and awards including induction into the chapter's Hall of Fame, Outstanding Educator Award and Outstanding Faculty Advisor. In addition, she received the Roland Page Graduate Teaching Award by student members of the Graduate Caucus of the Grady College in recognition of high standards of teaching and concern for students.

“I believe my responsibility as an educator is to help my students feel confident beyond the classroom, especially as they encounter new challenges in pursuit of their careers,” explains Sallot in an interview she did with the Plank Center leading up to the ceremony. “I view my role as a mentor as a more intense and intensive extension of my teaching philosophy.”

Former Grady College Dean Culpepper Clark was one of the first recipients of the Plank Milestones for Mentoring Award given for an outstanding educator in 2010.

The Plank Center for Leadership in Public Relations at the University of Alabama develops and supports leadership in public relations education and practice through scholarships, student awards, distinguished lecturers, funded research into leadership, and Webinars.