Kate Fortmueller teaches courses in media industries and media theory. Her research focuses on media industry studies with an emphasis on labor.

Dr. Fortmueller’s work combines political economy, media industries studies, and cultural studies. Her research on actors and below the line talent utilizes both archival evidence and ethnographic methods to explore historical and contemporary issues for people working in film, television, and digital production. Her work appears in Film History, the Historical Journal of Film, Radio, and Television, Journal of Film and Video, Journal of Popular Film and Television, Media Industries, and Television & New Media.

Dr. Fortmueller’s books, Below the Stars: How the Labor of Working Actors and Extras Shapes Media Production  and Hollywood Shutdown: Production, Distribution, and Exhibition in the Time of COVID , were both published by the University of Texas Press in 2021.

She is currently co-editing an anthology on Hollywood unions and guilds and writing a second book for University of Texas Press about the effect of the pandemic on the entertainment media industries.

She is the chair of the Professional Development Committee and co-chair of the Media Industries SIG in the Society for Cinema and Media Studies.

Picture it, U.S. 2020…’: The Golden Girls and sitcom nostalgia during the pandemic Kate Fortmueller

Kate Fortmueller is co-moderating a webinar on “Working in the Media Industries: Qualitative & Quantitative Market Research,” from 12 noon to 1 p.m. on Sept. 16. Abstract: Interested in incorporating […]

Fortmueller, K. (forthcoming 2022.) “Vintage Furniture: The Significance of the Casting Couch as Industry Gossip and Rumour,” NECSUS European Journal of Cinema and Media Studies. Abstract: In this article, I argue […]

Panel Overview: In October 2021, with the International Alliance of Theatrical Stage Employees (IATSE) on the brink of a strike, film and television unions around the world began to issue […]

Abstract: When the coronavirus pandemic hit the United States and people across the country began to shelter in place, viewers turned to the big personalities of the big cat world, […]

Abstract: Hollywood Unions is a unique collection that tells the stories of the unions and guilds that have organized motion picture and television labor: the DGA, IATSE, SAG-AFTRA, and WGA. […]

Read More
Below the Stars: How the Labor of Actors and Extras Shapes Media Production Kate Fortmueller

Abstract: Despite their considerable presence in Hollywood, extras and working actors have received scant attention within film and media studies as significant contributors to the history of the industry. Looking […]

From the 1910s through the end of the studio system in the 1940s studio heads and publicity departments crafted a system to manufacture and capitalize on the idea of charisma. […]

Abstract: In 2020, widespread shutdowns as a result of the COVID-19 pandemic disrupted how we make, distribute, and watch media. Around the world businesses, cities, and borders closed in order […]

Abstract: Hollywood Shutdown examines the effect of the COVID-19 pandemic on Hollywood beginning with the closure of movie theaters in China over Chinese New Year and ending with Mulan’s bumpy […]

Abstract: The 1950s and 1960s saw a swell of films shot on location and abroad, often big-budget, widescreen epic films. These runaway productions represented a practical financial decision for Hollywood […]

Abstract:  In the 1970s, almost fifty years before the “Time’s Up” movement, women in Hollywood unions organized “women’s committees” to counter institutional sexism and address rampant underemployment. While the unions […]

Abstract: The early 1970s marked a number of significant changes in the television landscape: new regulatory structures, the growth of cable, and shifts in programming including a steep rise in […]

Abstract: In the 1970s, almost fifty years before the “Time’s Up” movement, women in Hollywood unions organized “women’s committees” to counter institutional sexism and address rampant underemployment. While the unions […]

Abstract: Actors are, and have always been, the biggest labor force in Hollywood. Although their faces might be familiar, how they have negotiated the extremely competitive and ever-changing business of […]

From the ragtag crews of 1910s productions to the organized backlots of Classical Hollywood to the runaway productions of the last fifty years, Hollywood has employed a wide array of […]

Abstract: “What type of sword am I wielding?” For most performers in visual media this question is moot, clearly answered by the prop department – but for video game voice […]

Dr. Fortmueller’s courses are designed to help students understand the relationship between media studies and media making while giving them a fuller understanding of media histories. Prior to teaching in Grady College, she taught in the University of Southern California’s School of Cinematic Arts and at Fairfield University. 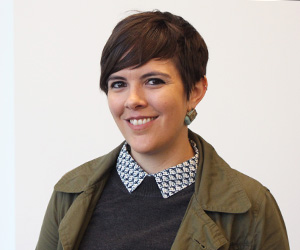