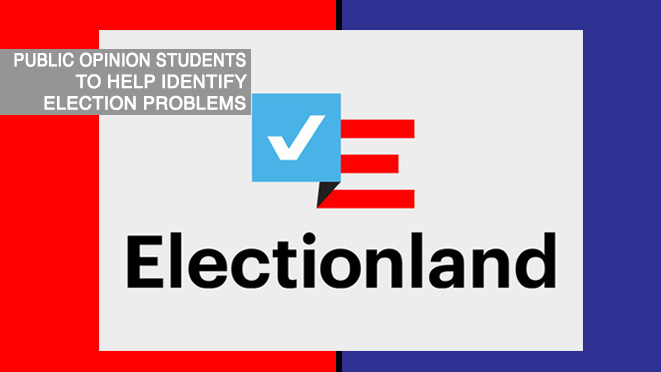 With rumors swirling around the country about a rigged presidential election and anticipated problems at the polls, there is little doubt that students in Barry Hollander’s course, Public Opinion and the 2016 Election, will have their hands full with Electionland on November 8.

Grady College is one of 13 journalism colleges across the county participating in Electionland, an effort to identify and verify problems at the polls. On election day, the public opinion students will be part of First Draft, a coalition of social newsgathering and verification specialists monitoring social media through apps like Facebook Signal, TinEye and Dataminr. They will be looking for voting problems like long lines, voting machine problems, accusations of intimidation issues, voter fraud and provisional balloting.

Once problems are identified, they will be sent to the headquarters at CUNY Graduate School of Journalism in New York where the problems will go through further verification and be forwarded to local journalists for follow-up.

“Think of this as seekers and catchers,” Hollander, a journalism professor at Grady College, said. “The students are the seekers. They go out scouring social media for reports of voting problems looking for key words. Their job is then to try to verify whether it’s really occurring. Then they send it up to the catchers in New York. They will verify it again then send back downstream to journalists on the street who can then do stories about voting problems.”

The Grady students will be responsible for monitoring Facebook, Twitter and Instagram throughout Georgia from 7 a.m. to 7 p.m. on election day. The students have a long list of key words they will be searching for that people might use to describe voting problems. Students will also be trying to verify the authenticity of photographs and have been trained in techniques used to spot fake photographs through reverse image searches, metadata and verifying file sizes to authenticate original photos.

“Rumors, conspiracy theories, debunking, fact finding and fact-checking…it’s what we do every day in journalism,” Hollander said. “We’re just focused here on the election. Once you master the skill in this domain, you can apply it anywhere else.”

Public Opinion and the 2016 Election is a special topics course comprising 27 students who have watched the debates, learned what public opinion is and how polls work. Each student is also assigned a journalist to cover and evaluate during the election.

Hollander has a few expectations for his students. “I expect the students to understand how hard it is to really measure public opinion and how to report and write about public opinion. This project is really a chance for them to master finding what’s going on in social media and verifying if it’s really true.”

“In a way, we are just part of the reporting step,” Hollander continued. “Our job is to save journalists the time and trouble of separating the chaff from the wheat.”

Other colleges participating in Electionland include, but are not limited to, the University of Florida, University of Tennessee and University of North Carolina. Each Frist Draft organization was assigned a geographic region to monitor and trained in the process needed for reporting.

Electionland is coordinated by ProPublica and a collation of news organizations including Google News Lab, USA Today Network and Univision, among others.