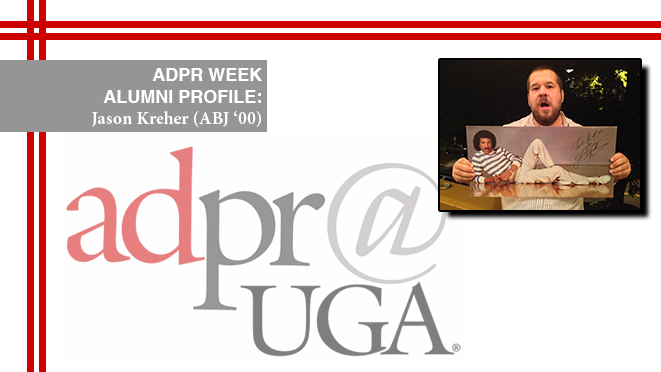 In honor of AdPR Week, we are profiling five Grady College alumni who are using their Grady education in the creative industries they serve. These individuals provide a positive influence on our current students so that after graduation, they will also prosper in their selected fields. For other alumni profiles, please see: Elizabeth Elmore (ABJ ’08), Elizabeth Howard (ABJ ’15) and Melissa Libby (ABJ ’85).

Jason Kreher (ABJ ’00) majored in advertising at Grady College and is a Creative Director for Wieden + Kennedy advertising agency that has represented many consumer brands such as Verizon, Old Spice Social Media, and Weight Watchers. Kreher was recently listed on Adweek’s “The Creative 100,” a list of America’s most inventive talent in marketing, media and tech.

We reached out to Kreher via email with the following questions:

Grady College: What are some of your everyday duties as a creative director?

Jason Kreher: It’s different every day, which is why I like my job for the most part. All of the thinking we do on each account is in service of making smart, funny work that people will like. I think a creative director’s job is to help identify the best ideas, and then to help protect those ideas from people who want to make them worse. I’m new at this though. Ask me again in 5 years.

GC: In your previous positions as an account executive, a copywriter, and also your current one, were there any assignments or duties that you were required to take on that surprised you?

JK: I had to explain to LL Cool J how airbags work. I once flew 36 hours to South Africa in order to shoot three pictures. I worked for two years on a campaign that never saw the light of day. I stood up in front of my entire agency and drank 9 shots of Jack Daniels. I sent Amy Sedaris a glitter-covered tampon. I sat in a warehouse for three days making sculptures out of cookies. I made a Super Bowl ad that nobody watched because they were all talking about the creepy dead kid who came on before it. Luke Wilson called me stupid, Maria Bamford called me a genius and Alec Baldwin called me fat. Only one of them was right. So, yes.

GC: What are some concepts or skills you would consider essentials for ADPR students to grasp before they graduate?

JK: Rejection. I am reasonably successful and I would estimate that 99.85% of my ideas have been rejected outright. Everyone needs to learn how to gracefully accept the fact that they don’t  know what they’re doing most of the time, and how to grow from that knowledge.

GC: After graduating, what was one of your biggest challenges while entering the job field?

JK: The job field itself. This is a very, very competitive industry and people fresh out of college have nothing to offer up. Yet. Your best bet is to position yourself as a hard-working and eager-to-learn idiot and then find a place where you can sit down and learn how to do great work.